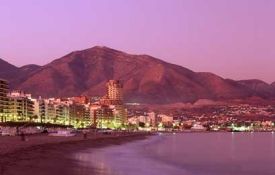 Most famous for its 5 miles of sandy blue flag beaches and being one of the most popular tourist destinations in Europe, Fuengirola is at the heart of the Costa del Sol. Boasting a wide promendae interspersed with palm trees, benches and colourful flower displays, the beachfront offers visitors the chance to soak up the sun and watch the world go by. The huge array of watersports on offer can be obtained from just about any point on the beachfront.

The town boasts an eclectic choice of cuisine with everything being available from traditional Andalucian dishes to the great British fry up. Of particular high quality are the local fish dishes available from beachfront cafe bars through to high class restaurants.

Benalmadena is made up of three different villages - in the hills is Benalmadena Pueblo, a beautiful and traditional Andalucian village with narrow streets of whitewashed houses. Arroyo de la Miel is closer to the coast and is a small but modern and fashionable town of shops and businesses that is popular with tourists. Along the coast, is Benalmadena Costa which is quickly becoming one of the most sought after locations for holidaying on Spain's glorious Costa del Sol with a 9km long beach and a 2km long promenade.

These three centres to the resort offer everything the holidaymaker needs, from amusements and attractions for all the family to a nightlife that lasts to the early hours of the morning. Peace and tranquillity can be found in Benalmadena Peublo, where it is best to park the car and walk around the narrow streets. La Paloma Park in Benalmadena Costa boats 200,000 square metres of gardens and is a haven for wildlife.

Benalmadena boasts one of the best marina's in the world and the largest on this coast, eclipsing even the famed Peurto Banus near Marbella. The marina complex is a hive of activity with beautifully styled apartments overlooking covered walkways that take you past shops, bars and numerous restaurants. Michael Schumacher has a large apartment and moors his yacht here. The Kaleidoscope bar in the marina complex is reputedly owned by Antonio Banderas, a native of Benalmadena who regularly vists the town with his wife, Melanie Griffiths. 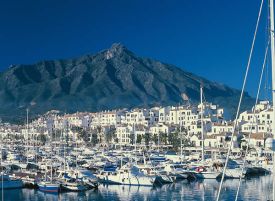 Puerto Banus is located just west of Marbella, It is the place to be pampered yacht­side and ogle those fabulous luxury yachts while sipping a drink at one of the many open air restaurants and bars. The setting is close to ideal, with its impressive mountain backdrop and ocean views. Since its inception some forty years ago, the port has steadily grown and now features a casino, commercial shopping centre, a Corte Ingles department store, marine observatory and a multi cinema with films shown with their original soundtrack.

Nightlife buzzes at Puerto Banus with your choice of alfresco bars (Sinatras bar is a must), piano clubs and discos. During the day it is a shoppers (and window shoppers) dream with all of the world renowned fashions houses present, in addition to small, interesting shops and boutiques. 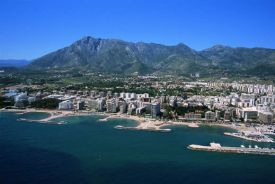 Marbella’s motto is "A Way of Life" and, this luxurious resort town seems to have it all. It is, one of Europe’s most exclusive holiday resorts and once again, is rising to the fore as a favourite location with the rich and famous, as well as more ordinary folk who are willing to pay just a little bit extra for southern Spain’s answer to St Tropez.

The shopping is fantastic and anyone with a shoe fetish beware! The 5 beaches, Tapas bars and restaurants are superb. Among its delights is the Old town with its spotlessly clean alleys, squares and smart shops and restaurants. The must visit is Plaza Los Naranjos ­ Orange Square. The Museo de Grabado Espanol Contemporaneo displays some of Picasso’s least known works. Marbella is less than 10 minutes drive from the apartment and there is easy car parking in the centre. Alternatively it is a c. 10 Euro taxis ride. 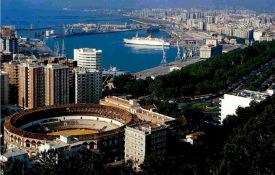 Easily overlooked in ones haste to reach the beaches of the Costa del Sol, Malaga has many fine features and a wealth of history dating back 3,000 years when it was founded as a Phoenician Colony. Since then the city has grown to some 600,000 inhabitants and has been ruled at various times by the Romans, the Moors and Carthaginians.

It is a vital port and industrial centre in Southern Spain, but retains charm and sophistication when one reaches the quieter back streets filled with tapas bars and bodegas. The birthplace of Pablo Picasso, the city has a museum dedicated to this fine artist's work and the house where he lived can be visited on Plaza de la Merced.

Cordoba was founded by the Romans and due to its strategic importance as the highest navigable point of the Guadalquivir River, it became a port city of great importance, used for shipping Spanish olive oil, wine and wheat back to Ancient Rome. The Romans built the mighty bridge crossing the river, now called "El Puente Romano". But Cordoba's hour of greatest glory was when it became the capital of the Moorish kingdom of El-Andalus, and this was when work began on the Great Mosque, or "Mezquita", which – after several centuries of additions and enlargements – became one of the largest in all of Islam. When the city was reconquered by the Christians in 1236, the new rulers of the city were so awed by its beauty that they left it standing, building their cathedral in the midst of its rows of arches and columns, and creating the extraordinary church-mosque we see today.

As well as the unique mosque-cathedral, Cordoba's treasures include the Alcazar, or Fortress, built by the Christians in 1328; the Calahorra Fort, originally built by the Arabs, which guards the Roman Bridge, on the far side of the river from the Mezquita, and the ancient Jewish Synagogue, now a museum. Cordoba's medieval quarter, once the home of the Jewish community, is called "La Judería" (The Jewry), a labyrinth of winding, narrow streets, shady flower-filled courtyards and picturesque squares such as La Plaza del Potro. In early May, homeowners proudly festoon their patios with flowers to compete for the city's "most beautiful courtyard" contest. 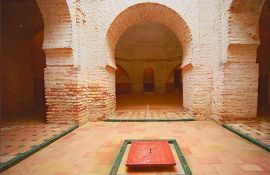 Jerez de la Frontera became famous throughout the world for its sweet wines named after the town, which the British pronounced "sherry". It is called "de la Frontera" because it once stood on the frontier between the Moorish and the Christian realms. Jerez is also famous, throughout the world, for its fine horses and brilliant singers and dancers of flamenco.

The distinctive wine in Jerez has been exported for centuries, it was even praised by Shakespeare. It is distinctive because the strong sun gives the grapes a high sugar content. British merchants have been involved in the wine trade here for centuries, producing and shipping a fortified wine known as sherry. Famous names of these dynasties can be seen here over the doors of the bodegas; Sandeman, John Harvey, Domecq, Gonzalez Byass.

The Spanish word bodega means "cellar", but it has the generical meaning of "wine manufacturer". You can take a guided tour of the many Jerez bodegas. Some of the companies such as Gonzalez Byass, Pedro Domecq and Sandeman – British winemakers have been active here for centuries, which is why many of the names have an Anglo-Saxon ring to them – provided guided tours of the cellars on weekdays, followed by sampling of the various types of wine produced.

But Jerez is also world famous for its magnificent dancing horses, which you can see at the Real Escuela Andaluza de Arte Equestre – the Royal Andalucian School of Equestrian Art, at Avenida de Abrantes (Tel: +34 956 311111). On Thursday mornings there is a spectacular display of dressage.

The town has a markedly aristocratic flavour with wide streets and squares. The 11th century Moorish fortress, or Alcazaba, has been partially restored. Of special interest is its church, originally built by the Arabs as a mosque. The Sacristy of the Cathedral del Salvador is home to a lovely painting by Zurbarán, The Sleeping Girl. Jerez celebrates its famous Horse Fair at the beginning of May each year.

Spectacularly located, Ronda is one of the oldest cities of Spain. Its origin, according to archaelogical findings in the old city space belongs to the Neolithic age. Despite of this, the presence of the human being in this land can be explained at a previous time. Proof of this are the sites found at caves, the most important being the one found at the Pileta's Cave, which is one of the best cave paintings examples of all the Paleolithic age in Andalucia.

Ronda was home to the Moors until the late 15th Century when the Catholic Monarchs conquered the town. Deep economical and cultural changes took place following this time and some of the most the defining moments in Ronda's history came in the 18th century with the building of the Famous Puenta Nuevo, or New Bridge, built across the deep Tajos Gorge and the Bullring.